Our “Father Feature” series highlights a Dad with daughters who wants to share his experiences. Learn more about them and get some real-life “dadvice” here. Know of a Dad you think should be featured? Send an email to todd@ddtime.org and nominate them (or yourself).

I have a wife and a 9 month old daughter (Johanna Joyce, or J.J.) 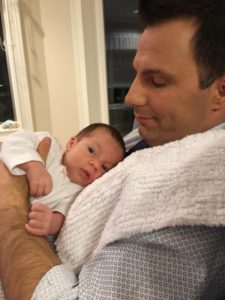 JJ very much wants Mommy and no one else oftentimes.  That’s been hard.  And it was really unexpected.  I had this idea going into fatherhood that ‘daddy’s little girl’ would want him all the time.  But, I’ve learned it’s a not uncommon thing for young children to be especially attached to Mom.  I’m told she’ll come around eventually.  So, I’m being patient.

Seeing her smile and hearing her laugh.  They never, ever get old.

It’s not positive or negative.  Just a realization.  I’d be playing with her for about 2 hours straight (she’s maybe 6 months old).  I was getting a little bored.  I started paying a little more attention to the TV and my phone.  She started crawling on me, obviously trying to get my attention.  I had this moment where I thought: “You can’t ignore her.  All she wants is you and your attention.  This is your daughter.  This is the most important thing in your life.”  I’m not unrealistic.  As she gets older and more self-sufficient, there will be times to leave her alone. And solo-play is important.  But, at 6 months old when your baby girl is desperately trying to get you to spend time with her – physically stretching out for me – it made me feel bad that I was disregarding her even for that moment.  I haven’t done it since. 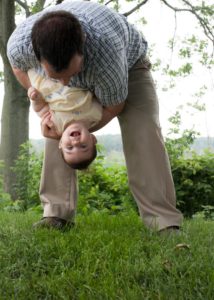 Recreational time has definitely taken a back seat.  The things I used to do with friends on the weekend happen less frequently.  Going into work early also doesn’t happen as often.  That’s just the way it is.  And I’m cool with that.  Especially the work part.  That was a step back that probably needed to happen anyway.  And I would like to say I don’t miss the free time with friends.  But, I do.  That said – these are the sacrifices you make when you decide to be a father.  And there are zero regrets.  I love being with my daughter and wife.

Referencing my previous answer: Remember to make sure you still have some free time to do the things you love.  Go golfing.  Go see a movie.  Remember you’re an individual, too.  Also, don’t neglect your marriage.  Being a dad is great.  But, being a husband is a pretty big deal, too.  That goes for whatever gender your child is.  As for daughters, specifically… I’m still pretty new at this.  My daughter is only 9 months.  So, I’ll have to revisit this question in a few years! 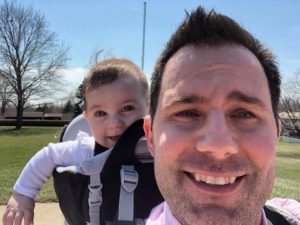