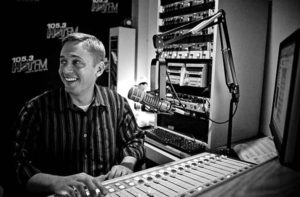 For half of my 12-year career in radio, I would wake up well before sunrise each day to try and deliver an entertaining and informative morning show. So I rarely had time to listen to other radio shows or watch morning television.

When I got a new job outside of the industry, I thought I would finally have the time catch up on what everyone else was doing.

Turns out, that wasn’t the case. It’s not that I don’t have the time. It’s just that I have a completely different morning show that covers all of the bases for me.

She’s four and she’s the highest rated “show” in my home and car. My daughter delivers all of the basic components of morning TV and radio. Let me break it down for you…

Morning radio and television shows are typically higher energy shows. My daughter has been known to go from “zombie sleep” to “dance, dance” mode in about 45 seconds after waking.  Even more curious is when the first words out of her mouth are a continuation of the conversation we were having at bedtime as if no time had passed and she had simply pressed Pause on her brain.

I like to start my day with some tunes. For this, my daughter delivers two popular options in her large repertoire of music:

This one pairs with music as well. If it’s rainy, I hear “Rain, rain go away, come again another day.” If it’s sunny, we sing “Oh, What a Beautiful Morning” from the musical “Oklahoma.” Weather is described in terms like sunny and cloudy, warm and cold, but also with “craft day,” “long pants day,” or “I want the blue sunscreen because that other sunscreen smells like dumpster” day.

I love well executed bits. Wacky characters used for comedic effect were fun to develop and deliver while on the air. But now instead of waking up to “Mr. Leonard and his Wheel of Meat,” I get to tune in to the ongoing Saga of the Stuffed Animals including a horse, baby doll, dog, and monkey. I’m pretty sure Molly the Monkey is the stunt boy even though she’s a girl. She gets tossed around a lot.

You can add “celebrity interviews” in here, too. The characters are starting to talk back as her imagination grows.

While radio and TV shows are giving me the latest breaking news, G is giving me up to the minute updates of things that happened over a year ago. Who knows what sparked the memory of her feeding a giraffe? And who cares? I’d rather relive that story than hear about immigration issues or health care.

While she completely understands the concept – (“a lot of cars on this road”), our traffic report always boils down to one thing: Did it recently rain enough to fill up the mud puddle at the bend of the road in our neighborhood so Daddy can splash it with his car tire.

To be honest, she stinks at this. She has no sense of time or what numbers means when it comes to the time of day or temperature outside. I have been told that she loves me “a million eight” while she proudly promises to sleep “for three minutes” during nap time. I think she thinks those two amounts are the same.

Thankfully, I have an iPhone to give me this info whenever I need it. But then again, I’d have to have my iPhone. Our recent Hooked on Phonics Learn to Read app has her wanting to hoard it.

I’ve got it all. She’s topical, local, entertaining, and informative…not to mention commercial free.  The only thing missing is my chance to win free concert tickets. I love this show.

If you like this, maybe you’ll like some of my other favorites? Men Suck… , The Wonder of a Weed, and the G-Talk series