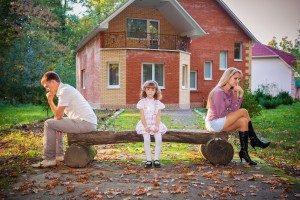 There are two types of divorce – ugly and really, really ugly. (I should amend that statement since I have met one other person whose divorce was unbelievably amicable. But it didn’t involve children).

Truth be told, you haven’t learned the true meaning of compromise until you have dealt with a lawyer and the words “custody battle”.

Fostering a relationship between Grace and my ex is my job and one that I do not only because it is required of me but also for the fact that it’s in Grace’s best interest.  So I’ll stick to the high road.

Is it difficult? You have no idea. Does it take nearly every ounce of resolve at times to let certain actions wash over me and not let them affect who I am or what I do? Ask my stomach. It hates me sometimes.

But someday Grace will be old enough to discern for herself who her parents are as people and question their actions.  When that day comes I want her to be able to look at me with respect and approval. And some (other) day I’ll be “old enough” to be standing in front of an even bigger Judge and I’ll want the same look from Him.

So this is for you Dads out there who might have been handed the short, spiky end of the stick.

If you’re frustrated trying to be logical with those who have no use for logic, or if you’re dealing with someone who makes a living in the gray areas between right and wrong, or maybe it’s something as basic as not sharing a set of values or priorities. Whatever it is for you, hang in there.

What matters is to know, really know, who you are as a father and to be able to show that to your daughter in whatever capacity you are given – even if that capacity isn’t what you deserve.

Fight for your rights. Stand up for who you are as a father. Hang on with tooth and nail and spend every last dollar you’ll ever earn to defend your relationship with your daughter.

For some, the struggle to stay civil may last longer than the actual Civil War. So feel free to check back to this post when times get tough. You’re a good Dad. You love your daughter. Dad up and show her what it means to live with integrity.